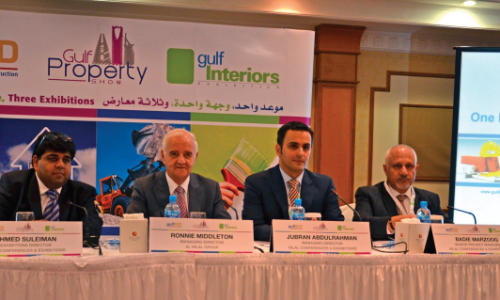 The promotional launch of the gulfBID, Gulf Property Show and gulfInteriors exhibitions was held in Manama in the presence of exhibitors, show sponsors and the media.

Speaking at the launch, Jubran Abdulrahman, Managing Director, HCE, said the shows, held under the patronage of HRH Prince Khalifa bin Salman Al Khalifa, Prime Minister of Bahrain from 6 to 8 May 2014, would be at least 1,000 square metres bigger than the total 7,500 square metre combined showcase in 2013.

He said: “The feedback we have received about the shows has been overwhelmingly positive, from both valued exhibitors and the thousands of visitors who passed through the doors of the exhibition centre last May.

“By bringing three distinct marquee shows together under one roof we offer the ultimate ‘one-stop-shop’ through the whole value chain – as the latest architectural and design trends and interior design capabilities are showcased alongside specialist construction services, building materials suppliers and the latest real estate projects in our region.”

Among the promotional initiatives HCE will undertake in the run up to next year’s shows are a high visibility outdoor marketing campaign to be initiated in strategic locations in Saudi Arabia and Bahrain, as well as a proactive marketing campaign across parent company Al Hilal Group’s market-leading trade magazines and daily newspapers, which have a GCC-wide reach.

Abdulrahman told guests that HCE’s optimism for the 2014 shows also drew upon the enduring economic strength of the northern Gulf countries – and the positive trickledown effect on the region’s real estate, construction and interiors sectors.

He continued: “It is clear that this remains a region of major opportunity for those in the construction, interiors and real estate development sectors.”

Launched in 2006, gulfBID is HCE’s flagship specialist showcase for the northern Gulf’s construction, building materials, services and contractors sectors. gulfInteriors will, meanwhile, feature home-grown and renowned international brands, covering sectors including furniture, paints, kitchens, bathrooms, lighting, ceramics, wall coverings and art & accessories segments. And Gulf Property Show, which debuted in 2013, has quickly established itself as the dedicated platform to showcase residential and commercial property projects in Bahrain and the GCC.

The three shows will be held at the Bahrain International Exhibition and Convention Centre (BIECC) from 6-8 May 2014.

Abdulrahman concluded by thanking exhibitors and show sponsors, in particular Tamkeen, which provides generous support for eligible Bahraini companies participating at the exhibitions through its Tarweej scheme.